A mixed 12 pack of some Other Half favorites shipped straight to your door! Shipping is currently available to DC, NH, NY, PA, VA, and VT. Packs come with two of each of the following beers:

Much Too Much Imperial IPA(8.5%) Too much or never enough? Over 9 lbs/bbl with Citra, Citra Cryo, Mosaic, Mosaic Cryo and Vic Secret. We use 2-row and a combo of flaked and malted oats in this beer.

HDHC Dense IPA (6.5%) This is just what the name says, dense. It’s dense with unnecessary amounts of hops from our High Density Hop Charge treatment designed to pack as many hops as we can into a beer. We use Citra, Mosaic and Sabro Incognito, a special aromatic hop extract, alongside the Cryo version of each hop. This combo quickly brings us to 11 lbs/bbl for a 6.5% beer! Our goal is make the beer drinkable at this hopping rate but still as aromatic as we possibly can.

Double Mmm… Fruit Berliner Weisse(6.5%) with Strawberry & Banana. Our fruited berliner series gets big doses of strawberry and banana puree. A bit like a banana smoothie but no lactose.

Saturated Chroma HDHC IPA (6.3%) Saturated is the theme. This is saturated with Citra and Mosaic incognito and Citra and Mosaic cryo. The high density of these hop products allow us to really push the limits of hop flavor and aroma.

DDH Hop Showers IPA (7.4%) with Simcoe. Our classic IPA with Amarillo and Citra. This batch is double dry hopped with Simcoe hops. 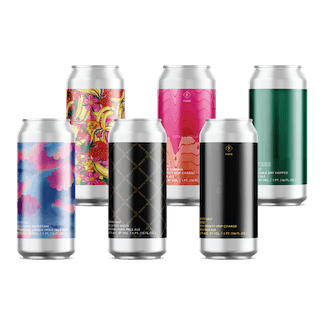